My new book, Far Company, is now out from Wayne State University Press. My book of poems informed by Great Lakes shipwrecks, Harborless, (Wayne State University Press), is a 2018 Michigan Notable Book and the winner of the 2017 Moveen Prize in Poetry. I also have two chapbooks. Apple Season won the Midwest Writing Center's 2012 Chapbook Contest, judged by Shane McCrae. The Sultan, The Skater, The Bicycle Maker won The Ledge Press 2011 Poetry Chapbook Award.  My poetry has appeared in a variety of journals, including Tin House Online, Passages North, Salamander, Sugar House Review, and West Branch. I write occasionally for Murder Ballad Monday, a blog devoted to the exploration of the murder ballad tradition in folk and popular music. I am a co-founder of Filmetry: A Festival of Film and Poetry.
Purchase far company
Purchase Harborless
FAR COMPANY 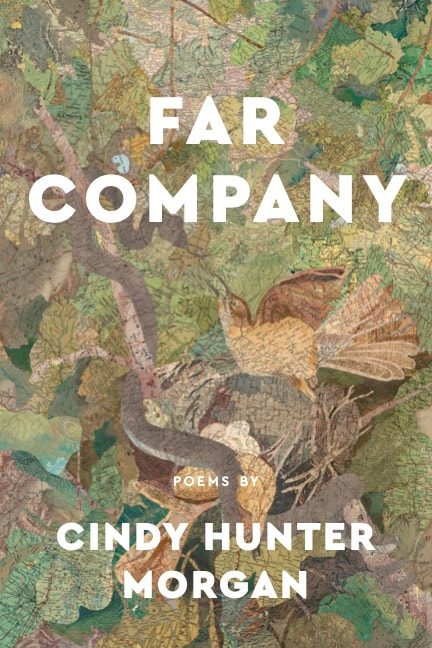 Earthly and sidereal, Cindy Hunter Morgan’s beautifully realized new book takes memory as its talisman, always mindful that “the stars watch from long ago.”  But “long-ago” can fade like invisible ink, as when a homemade Halloween costume both erases and silences a girl at her new school, or when warrior paint impishly applied to a mother’s face prompts her baffling retreat to the hideout of her sewing room.  Given so much disappearance, “After the Dragonflies” strives “to see the world in slow motion”; but just as often, Hunter Morgan’s poems convey the eerie exactitude of time-lapse photography, duration quickened to reveal the world’s secret acts of becoming. Time after time, Far Company discovers those liminal moments when the unseen shades into vision.  Who wouldn’t wish to linger there?
--Steven Cramer, author of Listen and Clangings

I simply love the quiet wisdom, the subtle music, the devotion to memory, and how imagination transforms the act of remembering, in Cindy Hunter Morgan’s poems. As she dwells in her grandmother’s orchard—the old house burned to ashes, horses dead and buried—she declaims, “where does anything go except / into forever.” Following W.S. Merwin as muse, Hunter Morgan has written into the present moment a gorgeous, lyrical celebration of how the long dead live in our bodies, how time collapses and is remade in poems.
—Todd Davis, author of Native Species and Winterkill

If you make yourself available to Cindy Hunter Morgan’s poems, they will revivify your experience of the most ordinary aspects of everyday life. Layering the childhood fears, wonders, and myths of her imagination in the animal world, she creates a kind of chrysalis for the emergence of a more deeply realized awareness of our present human experience.  These poems shine and resonate."
—Dan Gerber 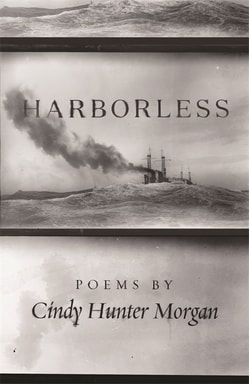 In Cindy Hunter Morgan’s elegant collection, Harborless, the unique power of historic poetry is on full display. These meticulous and striking poems balance imagination and fact to explore the complex maritime narratives of the Great Lakes. The result is an important and refreshing book full of unexpected histories and wonder.
– Adrian Matejka, author of The Big Smoke

Here, a shipload of cast iron stoves slips to the bottom of the lake, where it will rest forever among the teacups, the crankshafts, the revolvers, and the bones of sailors. On one level, Cindy Hunter Morgan’s Harborless is a deft and moving chronicle of forty shipping catastrophes in the Great Lakes, described with loving attention to detail, to the tiny particulars that create our sense of a whole story. But on a greater level, this is also a book about the transience of human experience, the vagaries of memory, and the forces that buffet all of us, often wildly and violently, during and after our lives. Harborless is a brilliant first book, one that will continue to haunt me.
– Kevin Prufer, co-curator of The Unsung Masters Series

OTHER LINKS:
A generous ﻿﻿review﻿ ﻿of my second chapbook, Apple Season, appears in the museum of americana.

My first chapbook, The Sultan, The Skater, The Bicycle Maker, got some fine praise from Justin Hamm in an interview he did for Speaking of Marvels -- a very cool site featuring a series of interviews about chapbooks.